Ahmedabad, the Manchester of India is one of the most populous cities in India, which was at the forefront of India’s Independence Movement during the first half of the 20th century. It is located by the banks of the Sabarmati River, near Gandhinagar, the Capital of Gujarat State. Ahmedabad is the economic hub in Gujarat and is also known as the best place to live in India economically.

Global Tree, Ahmedabad is located in Vastrapur, where the prestigious Indian Institute of Management is located. As it is located in the heart of the city, it is easy to reach people from neighboring areas like Maninagr, Vastral, Naroda, Gota, Kathwada, Shela, Shilaj, and also from Gandhinagar, Anand, Surendranagar, Rajkot, and Surat.

Beginning from abroad education consultation in Ahmedabad for countries like the USA, UK, Canada, Australia, Germany, and other European Countries, our study abroad counselors help in

Once received an invitation from the university, they proceed with the visa process. Our Top Visa Agents in Ahmedabad will start from Profile evaluation till planning concierge.

Services Offered by our Visa Professionals in Ahmedabad.

Along with the key services, our Best Trainers in Ahmedabad provide coaching for GMAT, GRE, IELTS, TOEFL, PTE, and SAT. 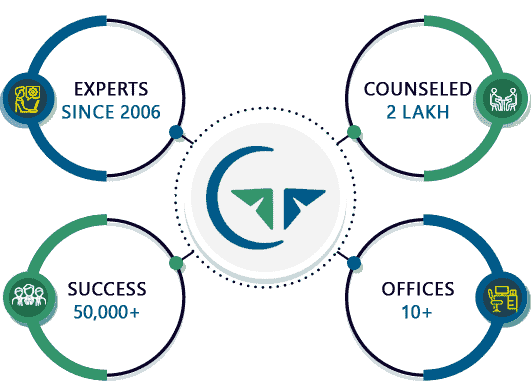 Transparency is our Culture. Have a look at our office floor in Ahmedabad.